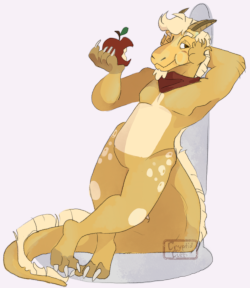 Art by Cryptid Cuffs 🔞
Pronouns he/him
Created 2016-02-21
You know what I think about cops, and you expect me to follow along? Get bent.

This happy go lucky fella doesn’t seem too bothered by anything that happens, always proclaiming that “it will sort itself out in time”, and it often does. Not the most stable emotionally, often just happy to exist, but easy to stress, and very much capable of lashing out.

Might have something to do with him being far from a pure bred dragon, which is obvious from a distance - the smooth scales of a dragon is replaced by a thick fluffy coat of something, that hardens and shrinks when heated. He lacks powers that most dragons have, lacking wings and elemental breath, but for some reason his claws are of a material similar to flint - except it also releases flammable gas when struck or heated. He got the claw on his right thumb coated in metal so he can use his index finger as a lighter, which he thinks is, I quote, “very cool”.

His metabolism is out of whack, to the point where he has an extremely low BMR - if he only lounges around all day, he doesn’t need more than an apple to sustain himself. However, if he’s active, he’ll need to shovel food down his throat to avoid turning into a fluffy twig. Just, you know, don’t expect him to stay still for long.

He had a less sheltered upbringing than his parents might have wanted, which has lead to a distrust of authority, he’ll question it all the way, and isn’t afraid to take to violence against things he doesn’t consider ethical.

Dusty has gone through three revisions now, changing visuals and personality. He's my fursona, i.e you'll probably find me under his name at places. Strip the fantasy coating, and you'll find that he reflects me pretty well. 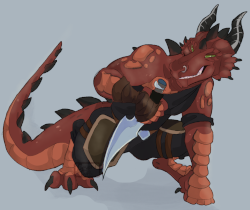 Art by Cryptid Cuffs 🔞
Pronouns they/them
Created 2020-10-04
If you want something, you know where to find me. Wait, uh, you probably don't. Let me give you my number.

This deep red pure dragon was the runt of the litter, and combined with the fact that they didn’t want to behave “like a man should”, lead him to get shunned by both family and society as a whole. They ran off at a pretty young age, and joined a roaming group of like minded people.

They run a courier service these days, operating outside the law. As long as it’s not going to hurt someone, they are willing to take the job, and they are famous for the speed of which they make deliveries. You’d expect a runt have trouble with roaming bandits, but not when it’s easy to hide and you can outrun them all. They’ve only gotten cornered once, and admittedly, that did end badly - that’s why they have a dagger these days.

I made them to explore some stuff regarding gender expression, and to get a character that is a bit more different than the other ones. 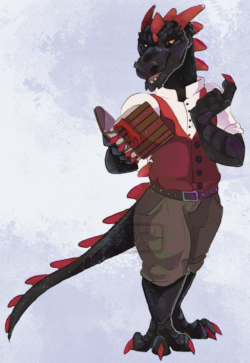 Art by Cryptid Cuffs 🔞
Pronouns he/him
Created 2012-04-23
Always happy to see people looking to learn. You know where the reference literature is, I won't keep you.

This dragon used to get into all kinds of trouble when he was young, but he’s mellowed out a bit over the years, or has at least gotten better at hiding it. These days he works as a librarian at the local library, and considers himself a “guardian of free knowledge” - according to some, he’s the one to get in touch with if you want to know the things others don’t want you to know. He’s got sources everywhere, and information deserves to be free.

Telasus was my last fursona before I got into MLP and left the furry fandom. I revived Telasus because of the amount of great memories I have from the people I talked to on Twitter at the time, as unlikely as that sounds today. He is, again, a mirror image of me, except more focused on the 'rogue archivist' part.