As I’m writing this, I’ve just finished with the scoring benchmarks for my entry to Shyra’s #CheapPCChallenge2022. I decided to go for something a bit extreme - taking the word cheap to the next level - and plenty of spanners were thrown in the works along the way. I’m surprised I got it as far as I got it!

I found out about this whole challenge a bit late. 22 days after it started, in fact. I went onto the local auction site, and proceeded to bid home an HP Elite 8300 SFF charitably described by the seller as “defective” - the DVD drive is broken, the case is mangled, and worst of all, it completely fails to load BIOS, causing the EC to spin up the fans after a minute as a safety measure. I also bid home an R9 280X, but that ended up irrelevant in the end - we’ll get to that when we come to that. 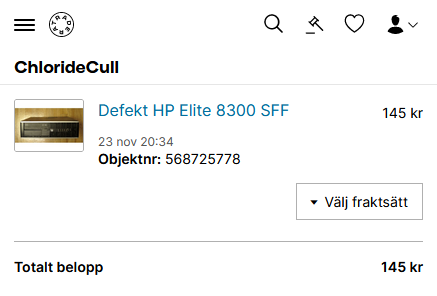 I finally got the cheap computer, and boy, was it broken. The Embedded Controller was completely unresponsive - I spent a couple hours trying to revive it, to no avail. It sure was mangled though. 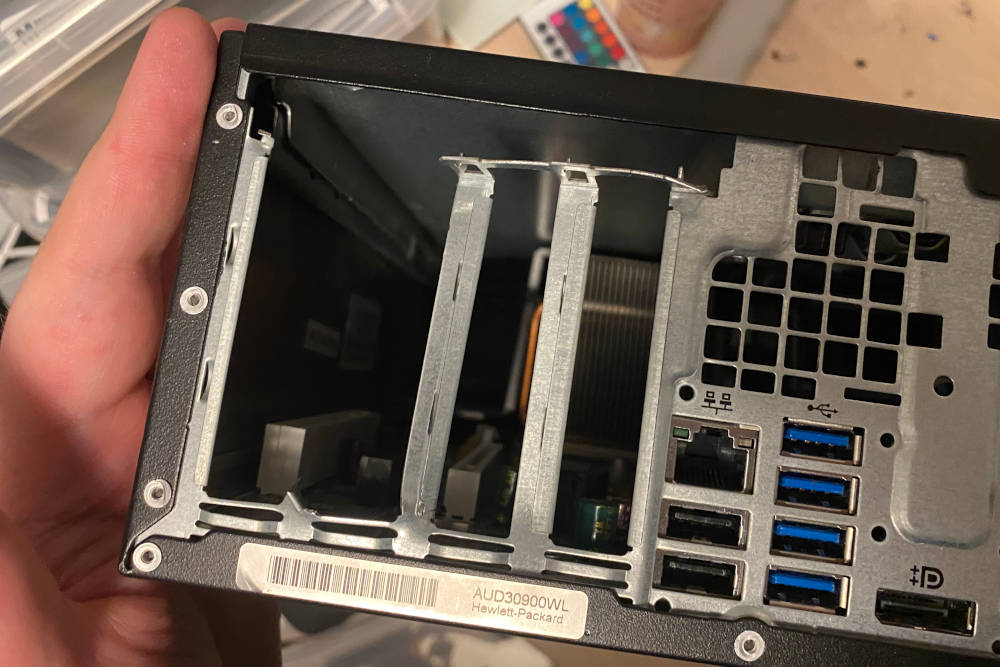 There was also a broken inductor right next to the Intel Ethernet IC, so you can guess how well that IC was working. 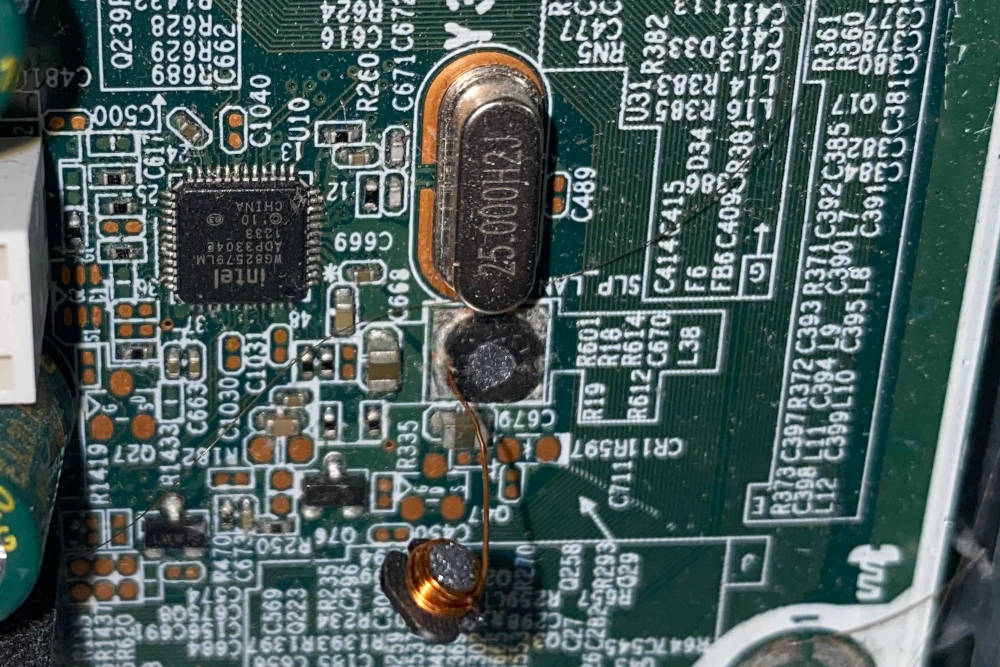 I did, however, order some RAM (open box deal) and a brand new SSD (literally the cheapest one available). I could’ve sourced it through eBay for cheaper, but, again, we’ll get to that later. 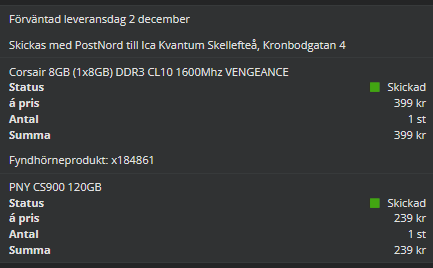 At this point, I also noticed the configuration this machine shipped with - the signs of its past life. It’s genuinely the first time I’ve seen a machine in the wild that shipped with FreeDOS. It’s also been professionally refurbished, and has a (sadly damaged) Windows 10 Pro for Refurb PCs COA. If you figure out the serial key, let me know. 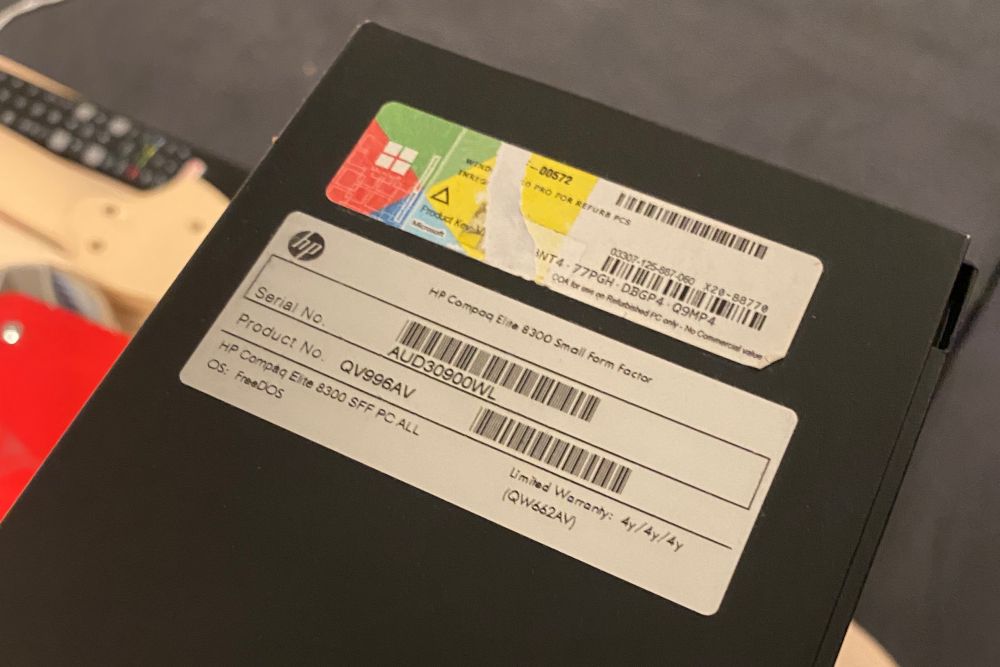 Going by the word of the seller, I also try to connect my SPI flasher to the BIOS chip on the motherboard - I was able to order a clip from Amazon before I got the computer thanks to this helpful post showing where it is and what clip I needed ahead of time. This failed spectacularly, because a dirt cheap SOIC-16 clip from Amazon has the rigidity of a wet noodle, and the plastic got chewed up instantly.

I got the package with the RAM, unsurprisingly it did not boot. It was at this weekend I decided to visit my parents, and managed to get COVID.

For those of you wondering - I had pretty mild symptoms, except my sense of smell and taste got pretty messed up. Gasoline smelled like broccoli, for some reason. The biggest issue was the brain fog.

Finally having some energy back after COVID, I slowly started tackling this PC again. I dumped the flash with the SPI flasher and the new IC clip (which was well worth the money), and transplanted over the unique regions I knew of back into an image pulled from the most recent update. My theory was that the previous owner had tried to downgrade the BIOS, which bricks it, or that an upgrade had bricked it, which is common enough that you have people asking about it on the support forums.

When it still didn’t boot, I decided to rip off the bandaid, and looked at the one place I hadn’t looked - under the CPU. I hate this god damn mechanism. It’s fragile, the off-kilter pressure gives bad heatsink contact, and it’s hard to even spot if a pin is bent. And guess what? Eventually, I spotted two bent pins. One was right next to another one of the same net, so it probably would be fine, but the other one was the sole VCCIO pin on that part of the chip.

Ready to give up, I threw caution to the wind, and attacked it with some fine electrical pliers out of my iFixit kit. Miraculously, I managed to bend the straight up broken VCCIO pin to a location where it would contact the pad on the CPU.

I have never been this happy to see this stupid message.

You can see which pin I “fixed” and which was left broken, by looking at this map. I fixed M13, while J4 was left as-is.

This left me with a conundrum - because I suddenly had a chance at finishing this, but I was missing the special cable used to get SATA power from the motherboard, since the proprietary power supply routes that through the motherboard to make it easier to swap. I also had no way of powering the GPU.

In another burst of energy, I tried replacing the broken inductor, but my soldering iron’s skinny tip couldn’t even start heating up the solder. Annoying, but I had somewhat planned for this. We’ll get to that later.

I also now realized that the flash is now in a weird mode where it reboots three times before it starts. It also always boots when powered up, no matter the settings. I also managed to wipe the model name from the BIOS. Whoops.

Using a PSU I dug out of the electronics recycling bin near my apartment in mid-November, I fired up the machine with the SSD, and installed Windows 10. I wouldn’t recommend using random PSUs with cut cables from a recycling bin, but I had the fire extinguisher nearby :) 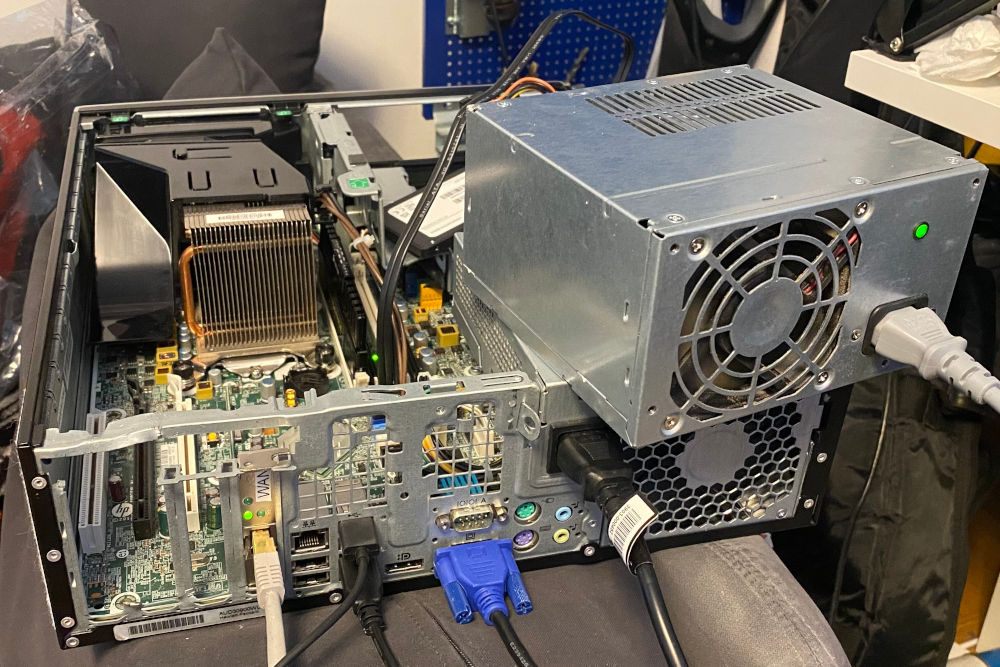 If you’re eagle eyed, you might spot that there’s a network card in there. You see, according to the rules of the challenge, you’re only supposed to use parts acquired after the challenge started. That network card is 5+ years old at this point. Thing is - I ordered one for this machine, but it won’t get here until the start of January because of eBay’s “Global Shipping Program”. You know, the program known for destroying whatever is sent through it.

This is a TP-Link TG-3468, and is generally what I go for when it comes to “needs a Gbps capable network card”. I bought one for £5 - I’ll be counting that into the budget, and you’ll just have to pretend this card is that identical card.

Hoping that doesn’t disqualify me, here’s the results!

As for results of the tests, and scores:

So, all in all, a fun thing to do, but christ, what a mess. I really wish I had the time to put that GPU in this, or even just run a single PSU, but that would necessitate a lot of splicing, since my dumpster PSU doesn’t have a GPU power connector either. It would’ve been way easier if I didn’t start 22 days late, or lost more than a week to COVID.

Starting late also basically barred me from buying things used internationally, because I couldn’t wait a week for things to arrive until I had a basic system actually working. Not being able to wait meant I ended up paying essentially double for the RAM, for example.

I also probably wouldn’t take a computer of unknown condition either to start with, but if I did, I would make sure to order enough spare parts to begin with to be able to just replace things if I can’t fix them. That bent pin was really close to killing this whole project.

I’d love to see this return for next year - my one critique is probably that the Google Docs test is really finnicky, relying entirely on manual timing. I also wish there was a grace period for the builds, having a cut off date for ordering parts a couple days before the end of the year, but giving up to mid-January for them to arrive, just so your build doesn’t get busted by things like the postal service being slow, or sellers not shipping out on time. The spirit of this is throwing together a powerful machine on the cheap in a limited time frame after all - and it sucks when you risk getting disqualified because of something out of your control.

I definitely plan on finishing this up sometime next year - I need to do something about the GPU, which involves making a custom fan duct, and also replacing the PSU, which, well, I probably want to do anyways. Might port coreboot to it, so I can more easily do UEFI crimes.

Wait, what about “the most ridiculous thing it can do”?

We’re talking about a $14 computer that running with two separate PSUs at the same time, which sparks unless you connect both of them at the same time, missing a component from the motherboard, with a BIOS flashed that makes it reboot three times before starting. The fact that it runs is already pretty ridiculous.

That being said, I did try to get VR running on it, but the DisplayPort on the integrated graphics doesn’t support monitors over 1080p. I ended up playing games for two hours on it by accident though! That integrated GPU isn’t the best, but it sure can handle 720p Low, as long as your game doesn’t need Vulkan or DX12, which the drivers are too old for.